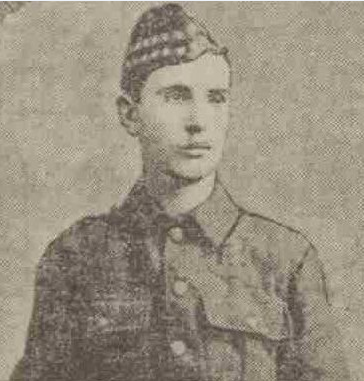 Alex has no known grave but is remembered on the La Ferte Memorial.

TO RECEIVE NEWS OF HER SOLDIER HUSBAND,

WHO HAS BEEN MISSING FOR THIRTEEN MONTHS.

Can any soldier give Mrs McKay, 37 Rosebank Road, Dundee, any information as to the fate of her husband.  Private Alexander McKay (No 8586), of the 1st Royal Scots Fusiliers?

Mrs McKay is in a perplexed state of mind, for she has received conflicting reports regarding his fate.  Being a reservist, Private McKay was called up on the mobilisation, and three weeks later Mrs M’Kay received a letter from him in which he informed her that he had just gone off to France.  That was the last communication she received from him, and although she inquired at the Record Office several times on each occasion she was informed that he was still with the Expeditionary Force.  In reply to her letters, a chum of Private McKay wrote that her husband was officially posted as missing, but the Record Office in reply to another communication stated that Private McKay had not been reported missing to them.  They, however, made inquiries at the base, and wrote to Mrs McKay stating that her husband was missing since June 2.

Can you tell us more about Alexander McKay'? Some additional facts, a small story handed down through the family or perhaps a picture or an heirloom you can share online. Contact our curator...