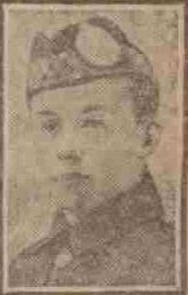 Robert has no known grave but is remembered on the Arras Memorial.

Official notification has reached Mr and Mrs Thomas McKee 57 Rosebank Street, that their son, Pte. Robert Campbell McKee, Argyll and Sutherland Highlanders, has been killed in action.  Pte. McKee who was only 19 years of age, was a clerk with Messrs Charles Barrie & Sons, before joining the army.

He is the fifth member of St Andrew’s Parish Boys’ Brigade who has fallen during the past month–all within a few days of each other.  He had been a member of the brigade for six years, and his ability and zeal had marked him out to be a successful leader in the movement had he been spared to come back to civil life.

Can you tell us more about Robert Campbell McKee'? Some additional facts, a small story handed down through the family or perhaps a picture or an heirloom you can share online. Contact our curator...