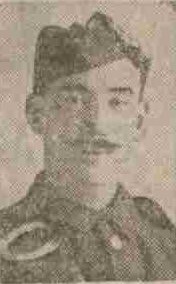 This man is listed as McKenzie on the original Dundee Roll of Honour.

Piper Donald Mackenzie, Seaforth Highlanders, whose wife resides at 7 Arklay Street, died from wounds while a prisoner of war in Germany.  Deceased enlisted fully two years ago, and went to France in December last.  He was taken prisoner on March 23, and the intimation Mrs Mackenzie has received is that her husband died in May.  Piper Mackenzie, who was 41 years of age, was employed as a clerk with Messrs George Howe & Brother, merchants and manufacturers, 2 India Buildings.

Can you tell us more about Donald Mackenzie'? Some additional facts, a small story handed down through the family or perhaps a picture or an heirloom you can share online. Contact our curator...