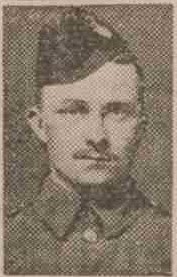 On 2 June 1915, ‘The Evening Telegraph’ reported on one family’s contribution to the war.

A PATRIOTIC LOCHEE FAMILY. The family of Mrs James Craigie, 10 Marybank Lane, Lochee, is doing its duty. Mrs Craigie has four sons, two sons-in-law, and a grandson serving with the colours. Their names (reading from left to right) are as follows – 1 Private Wm. Craigie (35), 2d Seaforth Highlanders; 2 Private David Craigie (31), 2d Seaforths; 3 Private Andrew Craigie (24), 4th Black Watch; and 4 Private George Craigie (21), 4th Black Watch (sons); 5 Sergeant Wm. Fisken (37), 25 Elder’s Lane, Lochee, 5th Black Watch; and 6 Sergeant T. McKim (24), 10 Marybank Lane, Lochee, 9th Seaforth Highlanders (sons-in-law); and Corporal James Binney, 4th Black Watch (grandson). Private David Craigie, writing to his wife, who resides at 10 Pitfour Street, Dundee, on 15th inst., says he believes he has been recommended for the D.C.M. He encloses a card signed by Major Wilcox, commanding the 4th Division, which reads – “Your commanding officer and brigade commander have informed me that you have distinguished yourself by conspicuous bravery in the field. I have read their report with much pleasure.” Describing the deed referred to Private David says he was in a trench with his brother William and a number of other Seaforths when the Germans attacked determinedly, using asphyxiating gases. William was rendered unconscious, and a number of the men were forced to retire, but, despite the agony caused by inhaling the gas, Private David and one or two comrades stuck to the trench, and fired their rifles, preventing the Germans from capturing the position. The Evening Telegraph and Post, Wednesday, 2 June 1915, 4.

Official intimation has been received by Mrs McKim, 79 Liff Road, Lochee, of the death in action of her husband, Sergeant T. McKim, Seaforth Highlanders.  In a letter to Mrs M’Kim an officer writes :___”Your husband’s loss is much deplored by both officers and men.  He was one of our eldest n.c.o’s, quiet and unassuming, and conscientious in all he did.”

Deceased who was 26 years of age, enlisted in September, 1914, he was previously employed as a sawyer in Lochee.

Can you tell us more about Thomas McKim? Some additional facts, a small story handed down through the family or perhaps a picture or an heirloom you can share online. Contact our curator...