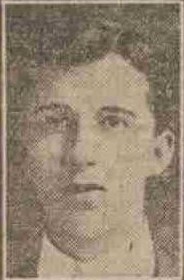 Farquhar has no known grave but is remembered on the Pozieres Memorial. This man is listed as McKinnon on the original Dundee Roll of Honour. He was the brother of Gunner Neil Mackinnon/McKinnon, 25199, 18th Battery, Royal Field Artillery, who died of wounds, 06.07.1917. Both brothers are listed on C.W.G.C. with different spellings of their surname.

Pte. Fred MacKinnon, Argyll and Sutherland Highlanders, is the second son of Mr and Mrs MacKinnon, 10 West Bell Street to make the supreme sacrifice.  Their son, Gunner Neil MacKinnon, R.F.A., who was employed in the Manchester office of the “Courier,” was killed in July, 1917.  Another son, Corporal Lauchlin, Seaforths, was severely wounded.  Fred, who was 27 years of age, enlisted in 1915, and had been on active service for two years.  Prior to enlisting he was employed in the Royal Hotel, Dundee.

Can you tell us more about Farquhar (Fred) Mackinnon/McKinnon'? Some additional facts, a small story handed down through the family or perhaps a picture or an heirloom you can share online. Contact our curator...