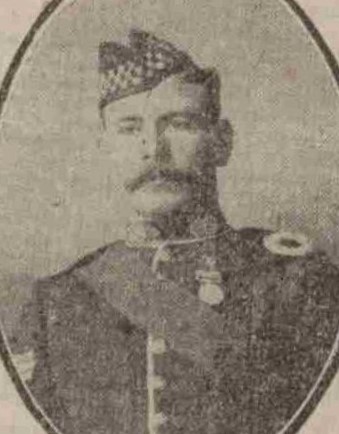 Andrew has no known grave but is remembered on the La Ferte Memorial. He is believed to be the brother of Major Joseph McLaren, 10th Battalion, Canadian Infantry, who was killed in action, 23.04.1915.

Official information has been given by the War Office to his brother and sister in Lochee that Sergeant Andrew McLaren, of the Argyll and Sutherland Highlanders, was killed in action on 20th August.  The news of his death has caused widespread regret in the district, where he was well known.

Sergeant A. McLaren was an ideal soldier.  Standing over six feet in height, he had few equals in the British army at sports.  He held the regimental championship for tossing the caber for some years in India.  Previous to gaining the rank of sergeant he served in the army for about fifteen years at home and abroad.  Although slightly wounded in the South African campaign, Sergeant McLaren took part in all the engagements with his gallant regiment__ “ the thin red line” of history.  He gained the medal and clasp for his brave deeds in that campaign, and was highly esteemed by his comrades.

Can you tell us more about Andrew McLaren'? Some additional facts, a small story handed down through the family or perhaps a picture or an heirloom you can share online. Contact our curator...