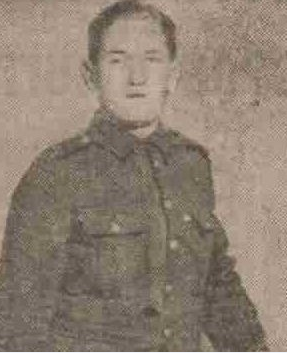 SUCCUMBS TO HIS WOUNDS.

Private G. MacLeish, a Dundee member of the 5th Black Watch, has died of wounds in hospital at Etretat, near Havre.  Deceased who comes from a soldiering family, was only 19½ years of age, and had been associated with the Angus and Dundee Battalion for nearly three years.

Private MacLeish’s parents, who reside at 16 North Wellington Street, received a telegram on Sunday informing them that their son was dangerously ill, and the sad intelligence has now come to hand that he passed away on the afternoon of the 18th inst.  A telegram from the Record Office at Perth states :–“Regret to inform you 1672 G. MacLeish, 5th Black Watch, died at 2.5 p.m.,18th May, in General Hospital, Etretat; cause of death shrapnel wound in ankle, received in action.”

Yesterday the parents of Private M’Leish received sympathetic letters from the matron and chaplain of the hospital.  The matron writes :–“I am very sorry indeed to have to tell you that your son became rapidly worse in the night and in spite of all the efforts made he never rallied, and died to-day, the 18th inst.  We are all so disappointed, as yesterday he was so fit that we thought that he had a chance of recovery.  He was very brave and patient.  It may be comfort for you to know that he was comfortable and was well cared for here.”

Chaplain Seymour B. Berry in his letter states :–“I have just come away from the bedside of your dear boy, who has laid down his life for his country.  It was at two o’clock that he died peacefully, as if he was going asleep.  Words are a very poor way of expressing one’s feelings for you at such a time as this.  Your boy has gone to receive from his Heavenly King the reward of a faithful servant.  May I say how very much I sympathise with you in your terrible loss?  Your boy will be buried here in a beautiful little churchyard.  The name of the place is Etretat, near Havre.  It is on the sea coast.”

Private MacLeish was formerly employed as a mill worker with Messrs Harry Walker & Sons.  He had been wounded on a previous occasion.  A brother at the front is a corporal in the 1st Highland Light Infantry.  The latter was hit in three places during a recent spell in the trenches, but his wounds were merely scratches, and he had been able to remain on duty.  Mr M’Leish, sen., is an old H.L.I. man, and his father was also connected with the army.

Can you tell us more about George Millar Macleish'? Some additional facts, a small story handed down through the family or perhaps a picture or an heirloom you can share online. Contact our curator...