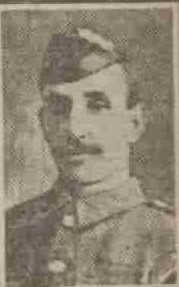 Joseph has no known grave but is remembered on the Arras Memorial.

Mr Donald McLeod, 32 Charles Street, Dundee, has received a letter from a chaplain at the front informing him that his son, Private Joseph McLeod, Black Watch, is posted as missing from 3rd May.  Pte. McLeod has seen a lot of fighting since joining up.  He was called up at the outbreak of war as a Reservist, and proceeded to the front with the original Expeditionary Force.  He was wounded on 16th September, 1914.

Before being called to the colours he was employed as a postman at Arbroath.  His father was an enthusiastic Dundee Volunteer

Can you tell us more about Joseph McLeod'? Some additional facts, a small story handed down through the family or perhaps a picture or an heirloom you can share online. Contact our curator...