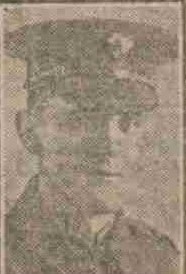 In musical circles in Dundee much regret will be occasioned by the intimation of the death of Signaller David G. McMahon of the Scots Guards, who was killed in action on 8th October.  Signaller McMahon who was a nephew of Mrs Hendry, 262 Perth Road, was formerly a clerk in the employment of Thomson, Shepherd, & Co., Limited, Seafield Works.  He had been in the Scots Guards for a considerable time.

Of an obliging and genial disposition, no one was more ready than David McMahon to place his musical talent at the disposal of any good cause.  He was a fine pianist, and a most entertaining singer of humorous songs.  In the early days of the war he gave his services unstintedly for the entertainment of wounded men in the hospitals and at concerts for war purposes.

Signaller David G. M’Mahon of the Scots Guards, has been killed in action.  Prior to Enlistment Signaller M’Mahon took an active part in musical circles in Dundee, and his death is greatly regretted by numerous friends and acquaintances in the city.  He was the organist of Rosebank Parish Church.

Can you tell us more about David Gillespie McMahon'? Some additional facts, a small story handed down through the family or perhaps a picture or an heirloom you can share online. Contact our curator...