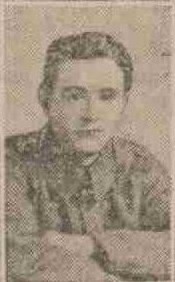 After braving the trials and dangers of Gallipoli, a Dundee man of the Royal Naval Division has been posted as missing.  Mr Alexander MacMaster, bootmaker, 43 Peddle Street, Dundee, has received official intimation that his son A.B. Harry MacMaster, R.N.D., had been reported missing on 13thNov.  The gallant A.B., who enlisted on the outbreak of war, had taken part in the Gallipoli campaign.  Prior to joining the forces he was employed with Mr Sandeman, grocer, Perth Road.

Official intimation has been received by Mr and Mrs MacMaster, 43 Peddie Street, Dundee, that their son, Harry MacMaster, R.N.D., who was reported missing in 1916, is now presumed to be killed.

Previous to enlistment deceased was employed as a grocer with Mr Andrew Sandeman, wine and spirit merchant, Perth Road, Dundee.  Two other sons are serving.

Can you tell us more about Henry Macmaster'? Some additional facts, a small story handed down through the family or perhaps a picture or an heirloom you can share online. Contact our curator...