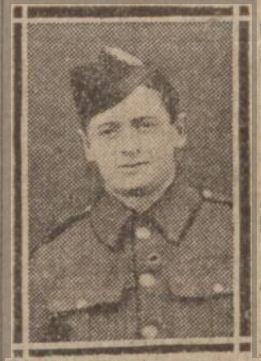 CONDUCTED HIMSELF WITH TRUE COURAGE.
Mrs D. M’Naughton, who resides at Parker’s Court, Dundee, has been notified that her husband has been killed in action.

Private M’Naughton, who was 23 years of age, was formerly employed by Messrs Langlands & M’Ainsh, Seagate, as a sawyer. He enlisted at the outbreak the war, and went to the front about 18 months ago. He was serving in the Black Watch. Part of a letter to his wife from the lieutenant commanding his company reads as follows:— “I can only say that during the past fortnight, when we have been in close contact with the enemy, he conducted himself with the true courage of a British soldier.”
Dundee Courier 10 August 1916

Can you tell us more about Dougal Cameron McNaughton'? Some additional facts, a small story handed down through the family or perhaps a picture or an heirloom you can share online. Contact our curator...