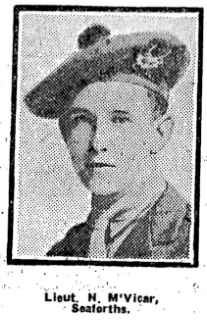 Second-Lieutenant Neil MacVicar, of the Seaforth Highlanders, only son of Dr Colin MacVicar, 24 South Tay Street, Dundee, has died of wounds received in the recent fighting.  Twenty-two years of age, Lieutenant MacVicar was in his third year as a medical student at University College, Dundee, and had previously been a pupil of Harris Academy and High School.  In March, 1916, he went to the officers’ training school, was gazetted to the Seaforths in July, and proceeded to the front in August.  He was wounded in the Somme advance at Beaumont Hamel, and on recovering from his wounds returned to the firing line.

Lieutenant MacVicar was a very promising young man, and his death will be mourned in a wide circle of friends.

Can you tell us more about Neil MacVicar'? Some additional facts, a small story handed down through the family or perhaps a picture or an heirloom you can share online. Contact our curator...