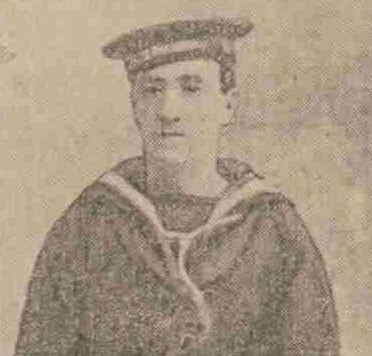 Joseph was aboard H.M.S. Falmouth which was a 5,250 ton Light Cruiser, when she was torpedoed twice by German Submarine U-66 on 19.08.1916 while screening the Grand Fleet. She was towed to Flamborough Head but was torpedoed a second time, again twice by Submarine U-63. All the crew were rescued by escorting Destroyers with no loss of live but one stoker (Joseph) died of injuries the next day. H.M.S. Falmouth  finally sunk 5 miles south of Flamborough Head on 19.08.1916.

The war has bereft Mrs M’Walter, 8 Dens Road, Dundee, of both her husband, who was a stoker on board H.M.S. Falmouth, and son James, a private in the Highland Light Infantry.

The photo is that of her husband, Joseph M’Walter, who went down with the Falmouth.  He was in the Royal Naval Reserve for sixteen years, and was 47 years of age.

Stoker Joseph M’Walter, a Dundee man, who was on board H.M.S. Falmouth when she was torpedoed on 19th August, is reported missing from that date.  Stoker M’Walter was in reserve, and was called up on the outbreak of war. He previously served in the navy for a period of sixteen years.  He is 47 years of age, and was before rejoining employed as an iron dresser in Wallace Foundry.  His daughter-in-law resides at 23 Watson Street, Dundee.  Stoker M’Walter has two sons serving, one being in the army and the other in the navy.

Can you tell us more about Joseph Richard McWalter'? Some additional facts, a small story handed down through the family or perhaps a picture or an heirloom you can share online. Contact our curator...