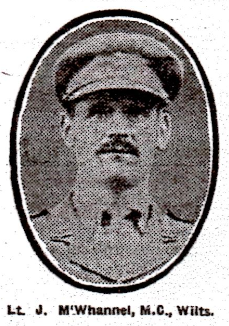 Official intimation was received from the War Office yesterday that Second-Lieutenant John M’Whannel had died of wounds.

Lieutenant M’Whannel joined the Scots Greys 18 years ago, and rose to the rank of sergeant-major.  He went through the Boer War, and was awarded the King and Queen’s Medals.  When the present war broke out he was a member of the Scots Greys who crossed over with the British Expeditionary Force.  He was mentioned in one of Sir John French’s despatches.  About five months ago he was transferred from the cavalry regiment when he was given a commission in the Wiltshire Regiment, and was held in high respect by his comrades.  He was the second son of Mr John McWhannel, late of Dundee, and now residing in London, and was a brother-in-law of Mr Daniel Beaton, church officer, Ryehill Church, and a nephew of Mr W James King, Lynnewood Place.  Deceased who was 36 years of age, is survived by a widow and three children.

DUNDEE OFFICER WHO DIED OF WOUNDS

The Military Cross has been conferred upon the late Second-Lieut John McWhannel, 2nd Wilts Regiment, for conspicuous gallantry.   He led a party of eight n.c.o.s and men into the enemy’s trenches to reconnoitre, and inflicted loss on the enemy.  Next night, when another reconnoitring patrol had failed owing to hostile fire, he went out alone to the enemy front line and brought back the required information.  He set a fine example.  Lieut McWhannel joined the Scots Greys 18 years ago, and rose to the rank of sergeant-major. He went through the Boer War, and was awarded the King and Queen’s Medals.  As a member of the Scots Greys he formed one of the original British Expeditionary Force, and was mentioned in one of Sir John French’s despatches.  Five months ago he was gazetted to the Wiltshire Regiment, but, unfortunately, he succumbed to wounds early in the present month.

Can you tell us more about John McWhannel'? Some additional facts, a small story handed down through the family or perhaps a picture or an heirloom you can share online. Contact our curator...