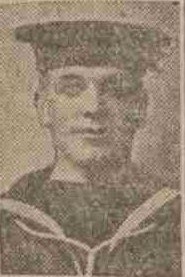 Arthur has no known grave but is remembered on the Portsmouth Naval Memorial. He was serving aboard H.M.S. Sarnia which was passenger ship requisitioned by the Admiralty and converted to an Armed Boarding Steamer. She was torpedoed and sunk 12.09.1918 by German Submarine U-65 while on route from Alexandria to Port Said with the loss of 53 lives.

Mr Arthur Melville, 87 Watson Street, Dundee, has been notified that his son A.B. Arthur Melville, Royal Naval Division, is missing, presumed drowned.  This intimation will be received with feelings of regret by travellers on the Dundee and Arbroath Joint Railway, where for about twelve years Arthur had been employed, latterly as a porter-guard.  He enlisted three years ago.

Can you tell us more about Arthur Melville'? Some additional facts, a small story handed down through the family or perhaps a picture or an heirloom you can share online. Contact our curator...