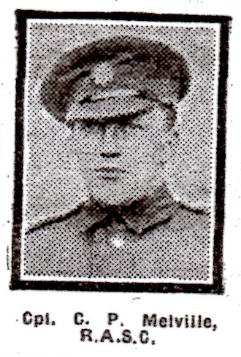 Intimation has just been received by Mr A. Melville, 118 Albert Street, Dundee, that his son, Corporal Charles Melville, Army Service Corps, has been killed in action.  Corporal Melville, who was 25 years of age, enlisted at the outbreak of war, and had been at the front for about two years.  An officer, writing from the front, states that Corporal Melville was a favourite with everybody, and before his death they were regretting the fact that he was applying for a commission, because they should lose him.

Prior to enlistment he was employed as a clerk with Messrs Lindsay & Low, Carolina Port, Dundee.  Mr Melville has another son with the forces.

Can you tell us more about Charles Potter Melville'? Some additional facts, a small story handed down through the family or perhaps a picture or an heirloom you can share online. Contact our curator...