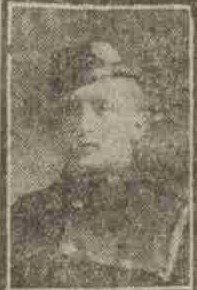 Pte. David Merrilees, London Scottish, son of Mr Thomas Merrilees, baker, Castle Street, Broughty Ferry, was wounded in both legs three days before armistice was signed, and later contracted pneumonia, as a result of which he died on 1st December.

Pte. Merrilees enlisted three years ago, and was drafted to British East Africa.  Subsequently he was sent to France, where he had been for six months.  Prior to joining the forces he was employed with Goodfellow & Steven, bakers, Broughty Ferry.  He leaves a widow and three children, who reside in Long Lane.  Three brothers of deceased are serving.

Can you tell us more about David Merrilees'? Some additional facts, a small story handed down through the family or perhaps a picture or an heirloom you can share online. Contact our curator...