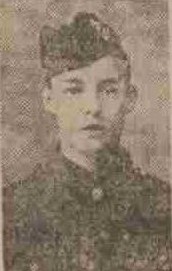 Corporal David Millar, Royal Scots, eldest son of Mrs Millar, 121a Hawkhill, is reported to be wounded and missing since 9th April.  About 21 years of age Corporal Millar enlisted two years ago, and has been at the front for 18 months.  He is an ex-member of the 3d (Y.M.C.A.) Company Boys Brigade, and has been three times previously wounded.  On each occasion he was treated at a French hospital.  He was engaged in the baking trade prior to enlistment, and was an apprentice in Lamb’s Hotel.

Can you tell us more about David Miller'? Some additional facts, a small story handed down through the family or perhaps a picture or an heirloom you can share online. Contact our curator...