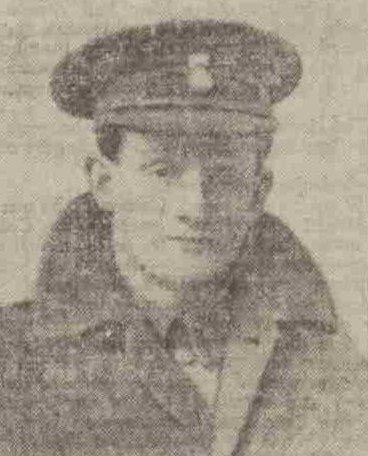 This man was listed on the original Dundee Roll of Honour as B. Miller, London Welsh Fusiliers, no one of that name and regiment is listed on either C.W.G.C. or S.D.G.W. or the Scottish National War Memorial, (there is no regiment known as the London Welsh Fusiliers) although he is listed on the original Dundee Roll of Honour and in the Peoples Journal War Memorial Supplement of 1925 and his death was reported in the Dundee Courier and Peoples Journal. It would appear that Benjamin’s real name was Benjamin Barnett Marlinski, and he served in the army as Barnett Marlinski. Barnett is listed on the C.W.G.C. and S.D.G.W.

Mr Arthur A. Miller, furrier, Nethergate, Dundee, has received intimation that his eldest son, Private B. Miller, of the 1st London Welsh Fusiliers, has been killed in action.

Private Miller enlisted on the outbreak of war, and has been ten months at the front.  He was 32 years of age, and leaves a widow and four children.

Intelligence has been conveyed to Mr A. A. Miller, furrier, Nethergate, that his eldest son, Private B. Miller, London Welsh Fusiliers, had been killed in action in France.  Deceased who was well known in Dundee, joined the forces at the outbreak of the war, and had served ten months at the front before meeting his death.  He is survived by a widow and four children.

Benjamin’s father Arthur was born in Lithuania and was married 4 times. First to Esther Hester Barnett in London 1884, then he married Minnie Maud Hughes in Rotherhythe 1902, he then married Annabella Brown in Dundee 1912 and finally Jessie Turnbull Robertson in Glasgow 1922.

Can you tell us more about Benjamin Barnett Miller or Marlinski'? Some additional facts, a small story handed down through the family or perhaps a picture or an heirloom you can share online. Contact our curator...