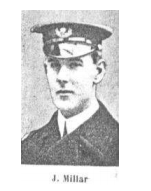 John and his brother Douglas were sons of Mr T.M. Millar, 6 Argyle Street, Dundee. According to the Dundee Seaman’s Roll this man served aboard H.M.S. Valiant II, and died July 5, 1915. The Morgan Academy Roll of Honour entry states that his ship was blown up when it struck a mine, but H.M.S. Valiant survived the Great War. There is also no record of this man recorded on C.W.G.C. database.

He was the brother of 2nd Lieutenant Douglas Archibald Millar, 11th Battalion Gordon Highlanders, who was killed in action 18.07.1916.

Can you tell us more about John Roger Millar'? Some additional facts, a small story handed down through the family or perhaps a picture or an heirloom you can share online. Contact our curator...