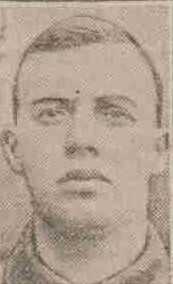 Intimation has been received by Mr James Miller, 69 Caldrum Street, Dundee, that his son, Private Robert Miller, Black Watch, was killed in action in the fighting on 23rd April.  In a letter conveying the sad news his officer states that deceased was a splendid soldier, and his death is a great loss to both officers and men.

Private Miller, who was thirty years of age, enlisted in October, 1915, and had been at the front for almost a year.

This is the second son Mr Miller has lost, as a son, William, was killed in March, 1915.

Roberts gravemarker has his surname as MILLER but the C.W.G.C. Grave registration report has been corrected/altered to indicate that his surname was MILLAR.

Robert is believed to be the brother of Pte William Miller, 3955, 10th Battalion Highland Light Infantry, who was killed in action 25.09.1915. Although he is recorded as MILLER he is also recorded as residing at 69 Caldrum St, Dundee. Both Robert & William are recorded as MILLER on the Peoples Journal War Memorial Supplement of 1925.

Can you tell us more about Robert Millar/Miller? Some additional facts, a small story handed down through the family or perhaps a picture or an heirloom you can share online. Contact our curator...