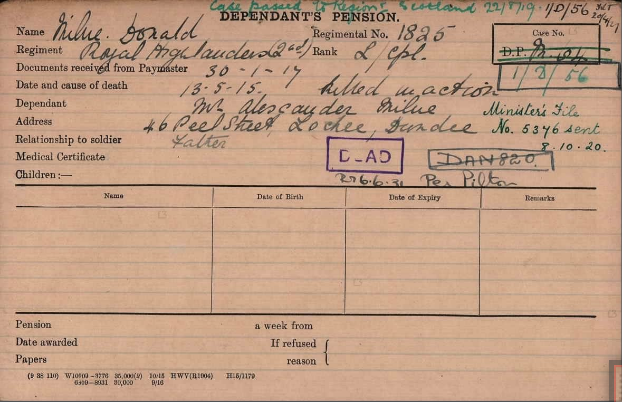 Donald has no known grave but is remembered on the Le Touret Memorial.

LOCHEE SOLDIER KILLED ON 9th MAY

“It is such men that our regiment owes its famous name.”  These words are contained in a letter from Lieut-Colonel Harvey, 2d Black Watch, to Mr Alex. Milne, Prospect Cottage, Peel Street, Lochee, intimating the death of the latter’s son Corporal David Milne.  “It is my sad duty,” the officer commanding writes, “to inform you that your son was killed on the afternoon of 9th May while taking part in an attack made by a portion of the battalion against German trenches.  Your son met his death while gallantly carrying out his duty.”

Deceased, who was 26 years of age, had been about five years in the Black Watch.  Other two brothers are with the colours.  Private Charles Milne, who was a reservist in the 2d Seaforth Highlanders, and owned a draper’ shop in Markinch, is at present at the front, while Private John Milne is with the Dundee Battery of the Royal Field Artillery.  This is the first break in a family of seven sons and four daughters. Dundee Courier 4th June 1915

Can you tell us more about Donald Milne'? Some additional facts, a small story handed down through the family or perhaps a picture or an heirloom you can share online. Contact our curator...