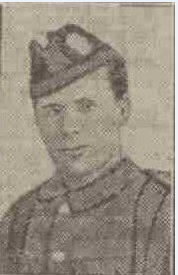 By the death in action of Private James Milne, of the Highland Light Infantry, a Dundee family has suffered its second bereavement through the war.  Private Milne was the son of Mrs R. Milne, 2 Court Street, whose six sons rallied to the colours after the beginning of hostilities.  The deceased joined the army in Greenock, where he was formerly employed.  He was 33 years of age.  His brother, Private John Milne, of the Royal Scots Fusiliers, was killed in the early stages of the war.  He was a reservist, and had seen service in India and Africa.

Can you tell us more about James Milne'? Some additional facts, a small story handed down through the family or perhaps a picture or an heirloom you can share online. Contact our curator...