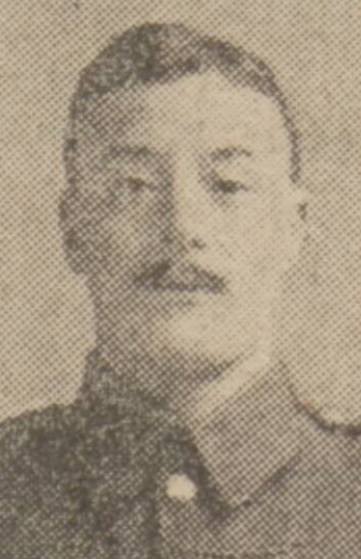 On 21 September 1916, The Courier reported on the death of 3878 Cpl. Alexander Mitchell, 4/5th Black Watch.
Cpl. Mitchell, who lived with his wife at 357 South Street, Lochee, was a talented junior footballer, and played with St Joseph’s.
In civilian life he was employed with D. H. Fleming, Sons, & Co.
Mitchell died of wounds on 10 September 1916, and is buried in Heilly Station Cemetery, Mericourt, L’Abbe, Somme, France.

DUNDEE FOOTBALLER KILLED. Another of Dundee’s footballers has made the supreme sacrifice.
Mrs Mitchell, 357 South Road, Lochee, has received intimation that her husband, Corporal Alexander Mitchell, Black Watch, had been killed. Deceased, who enlisted in February of last year, was well known in junior football circles. He was connected with St Joseph’s Club, for which he played for many years. In civil life Corporal Mitchell was employed as a bundler with D. H. Fleming, Sons, & Co., Ltd., Gray Street Works, Lochee. He is survived by a widow and four of a family. The Courier, Thursday, 21 September 1916, 4.

Can you tell us more about Alexander Mitchell'? Some additional facts, a small story handed down through the family or perhaps a picture or an heirloom you can share online. Contact our curator...