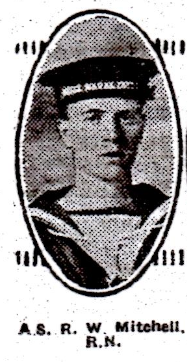 DIES OF WOUNDS IN HOSPITAL

The official news stated that he sustained a gunshot wound in the left thigh. The last news Mrs. Mitchell received from her son referred to the 11th inst, as his fourth day at sea.  A.B. Mitchell was 21 years of age, and enlisted three months ago.  He was home on Furlough several weeks ago.  He was formerly employed by the Dundee Supply Company Commercial Street.

News has been received of the death from wounds in the Royal Naval Hospital, Gibraltar of Seaman Robert Watt Mitchell, of the Howe Battalion, 2nd Royal Naval Brigade, Royal Naval Division.  Seaman Mitchell, who was 21 years of age, was a son of Mr Alexander Mitchell, Kinloch Place, 105 Hawkhill, Dundee.

Able Seaman Robert Watt Mitchell, a young man of Dundee, was yesterday officially reported as having died from a gunshot wound.  He was in the Howe Battalion of the R.N.V.R.

Can you tell us more about Robert Watt Mitchell'? Some additional facts, a small story handed down through the family or perhaps a picture or an heirloom you can share online. Contact our curator...