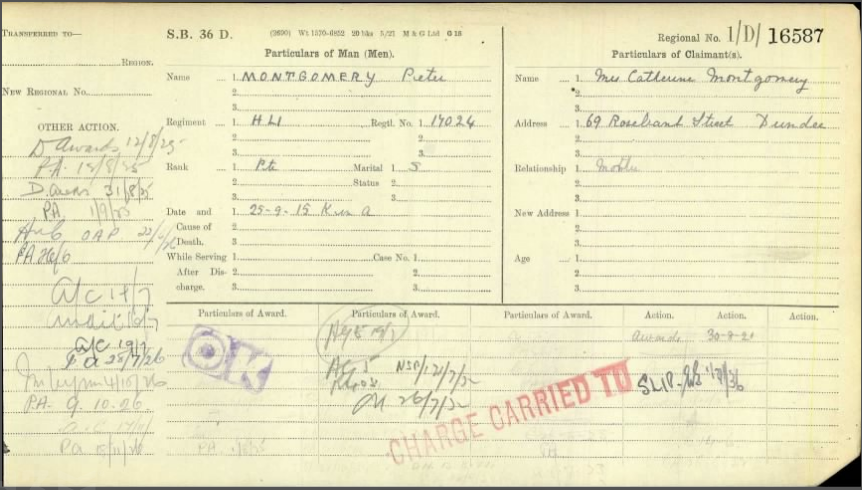 Peter has no known grave but is remembered on the Loos Memorial.

Peter Montgomery was born at 42 Forebank Road Dundee on 30th May 1897 to parents David and Catherine.
Peter’s service records are amongst those lost to the bombing of the London records repository in ww2 but we can identify his service pathway from those other documents that remain.  Given that he arrived in France in May 1915 with the 10th(Service) Bn Highland Light Infantry,  serving in the 28th Brigade of the Kitchener New Army 9th Scottish Division alongside their Sister Bn the 11th (Service) Bn HLI
He is amongst those very many Scot’s who gave their lives on the contentious battlefield of Loos in 1915,  Specifically he was Killed in Action on the first day of that battle His battalion,  Brigade and Indeed the Division suffering amongst the worst casualties of that Battle.  The Battle of Loos has gone down in history as being a very “Scottish” Battle,   so termed because of the significant number of Scottish Infantry Battalions involved in the main battle,  (35), and another 9 Scottish Bns involved in Diversionary Attacks or Reserve brought forward on 27 Sept 15.   A total of 44 Scottish Bns  involved directly or indirectly explaining the very apt description applied later that this Battle was amongst the worst in casualty terms for Scotland.  It is aid that there wasn’t a village,  town or City unaffected by the Losses at Loos.  Dundee is said to have been particularly impacted by this battle,  not least because of the large number of Dundonians involved across the many different units and battalions involved
After his sacrifice his mother was residing at 69 Rosebank Street,  a street where a great many men from Dundee emanated and served or sacrificed on the field of battle
His Pension record shows his mother Catherine was awarded a pension of 5/-  (5 shillings), a week for the loss of Peter but interestingly the beaurocracy of the day shows it took just under a years for this to be awarded and paid,  (June 1916)

Can you tell us more about Peter Montgomery'? Some additional facts, a small story handed down through the family or perhaps a picture or an heirloom you can share online. Contact our curator...