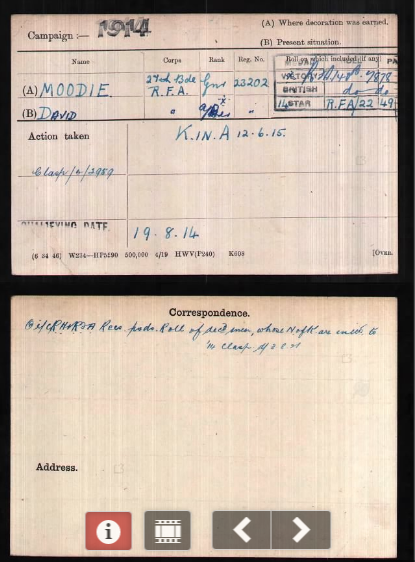 David has no known grave but is remembered on the Menin Gate Memorial.

Gunner David Moodie, of the 121st Battery R.F.A., second son of the late Mr David Moodie, merchant, Dundee, has been killed in action in France after going through the campaign from practically the very start.  The War Office intimation states he was killed on 12th June.

Gunner Moodie was married, and had three of a family.  He was about 30 years of age, and for a considerable time back had made his home in London.  On the outbreak of war he was called up.  Deceased’s mother and other members of the family reside at 63 Gellatly Street.

Can you tell us more about David Moodie'? Some additional facts, a small story handed down through the family or perhaps a picture or an heirloom you can share online. Contact our curator...