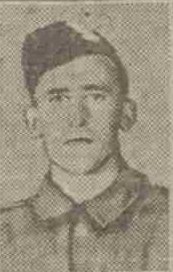 Private James Morrison, Black Watch, was killed in action on 18th November.  Deceased who was 27 years of age, is survived by his wife and two children, who reside at 3 Constitution Street, Dundee.  Prior to enlisting he was employed at Duntrune Quarries.

Mrs Morrison, 3 Constitution Street, Dundee, has been officially informed of the death at the front of her husband, Private James Morrison, Black Watch.  Deceased enlisted in July, 1916, and went to the front in December, 1917.  Prior to joining the army, he was employed at the quarries at Duntrune.

Can you tell us more about James Blyth Morrison'? Some additional facts, a small story handed down through the family or perhaps a picture or an heirloom you can share online. Contact our curator...