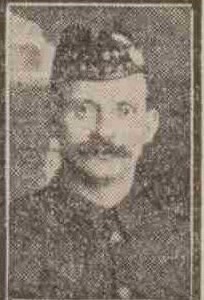 IS KILLED IN ACTION AFTER A MONTH’S SERVICE.

A Dundee family has experienced a remarkable realisation of a soldier’s strange premonition of impending disaster.

Before leaving home to join his regiment, the 1st Royal Scots Fusiliers, Private William Morrison, 59 Milnbank Road, Dundee, declared to his friends that something within him told him he would not come back.  He left Scotland for the front on 3d December, and his wife received official intimation of his death in action on 10th January.

Private Morrison was a tried soldier.  For sixteen years he was associated with the Black Watch, with which regiment he passed through the whole of the South African campaign.  He was wounded at Magersfontein, and was the possessor of two medals.  His time expired in February last year, but he enlisted in the Royal Scots Fusiliers on 5th November.

In civil life he was employed on the North British Railway as a goods guard.  He was in his thirty-fifth year, and is survived by his widow and two children.

Can you tell us more about William Morrison'? Some additional facts, a small story handed down through the family or perhaps a picture or an heirloom you can share online. Contact our curator...