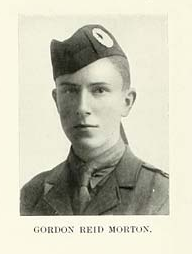 Gordon was awarded the Military Cross on 08.04.1917 “For conspicuous gallantry and devotion to duty when in command of a raiding party. He led his men in a most gallant manner and destroyed a hostile machine gun. Later he carried a wounded man back to our lines”.

Second-Lieutenant Gordon R. Morton, Cameron Highlanders, whose name appears in the list of officers upon whom the Military Cross has been conferred has unfortunately not lived to wear his decoration, as he was killed in action on 9th April.  He was the younger son of the late Rev. Hugh D. Morton, Lochee West U.F. Church, and Mrs Morton, 32 Albany Terrace, Dundee.

Can you tell us more about Gordon Reid Morton'? Some additional facts, a small story handed down through the family or perhaps a picture or an heirloom you can share online. Contact our curator...