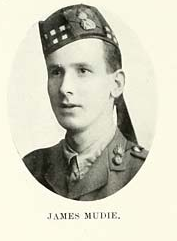 An able student of University College, Dundee, and an enthusiastic member of the OTC, James Mudie was preparing to enter the teaching profession when war broke out. He received a commission in the Royal Scots Fusiliers . He went to the East with the Royal Scots to which he was afterwards attached.

Another of Dundee’s promising young men has fallen on the battlefield.

Mr James Mudie, caretaker of the School Board Offices, Dundee, received the sad intelligence yesterday that his only son, Lieut. James Mudie, Royal Scots, had been killed in action.  Deceased, who was 21 years of age, had adopted the teaching profession for his career, and everything pointed to his taking a place in the scholastic world.  He was educated at the Morgan Academy, where he displayed qualities in his later years which marked him out as one well fitted to impart knowledge to others.  He proceeded to University College, Dundee, with the view of taking his M.A. degree, and was in his last year when he answered his country’s call.  While at College he gained the medal for English literature, while he also took a high position in his other classes.

An enthusiastic member of the O.T.C., he joined the Royal Scots Fusiliers, but was afterwards attached to the Royal Scots.  He had seen fighting on two fronts in the east.  Of a bright and cheery disposition, Lieut. Mudie was greatly liked by all with whom he came in contact, and deep sympathy will be extended to Mr and Mrs Mudie and family on their great loss.

Can you tell us more about James Mudie'? Some additional facts, a small story handed down through the family or perhaps a picture or an heirloom you can share online. Contact our curator...