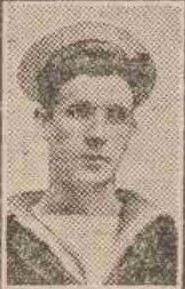 John has no known grave but is remembered on the Portsmouth Naval Memorial. He was serving aboard H.M.S. Stephen Furness, which was requisitioned by the Admiralty for use as a Squadron Supply Ship (1915) and later as an Armed Boarding Steamer. She sank at 16:15 on 13 December, 1917 of the West Coast of the Isle of Man. The ship was enroute from Lerwick to Liverpool for repairs when she was struck by a torpedo from German Submarine UB-64.

Mrs Mudie, 33 Watson Street, Dundee, has been officially notified that her husband, Leading Seaman John Mudie, R.N.R., has been killed through naval action.  He was in the R.N.R., and was called up when war broke out.

Previous to the outbreak of hostilities he was resident in Glasgow, and was employed as a merchant seaman.  He leaves a widow and four children.

Can you tell us more about John Fitzgerald Mudie? Some additional facts, a small story handed down through the family or perhaps a picture or an heirloom you can share online. Contact our curator...