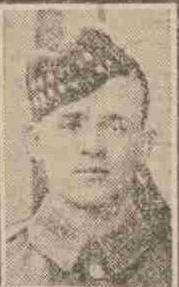 Private Mulholland, whose wife resides at 3 Blackness Road, Dundee, is 21 years of age.  He enlisted about thirteen months ago, and has been at the front for the past seven months.  Prior to enlistment Pte. Mulholland was employed as a mill worker by the Victoria Spinning Co., Ltd., Queen Victoria Works, Dundee.  Three brothers of the missing soldier are serving in the army.

Reported missing on 24th July, 1916, Private Mulholland, Royal Scots, is now posted as having been killed on that date.  Private Mulholland who resided at 3 Blackness Road, Dundee, entered the army about two years ago, and previous to enlisting he was in the employment of Mr David Rollo, coal merchant.  He leaves a widow and two of a family.

Can you tell us more about John Mulholland'? Some additional facts, a small story handed down through the family or perhaps a picture or an heirloom you can share online. Contact our curator...