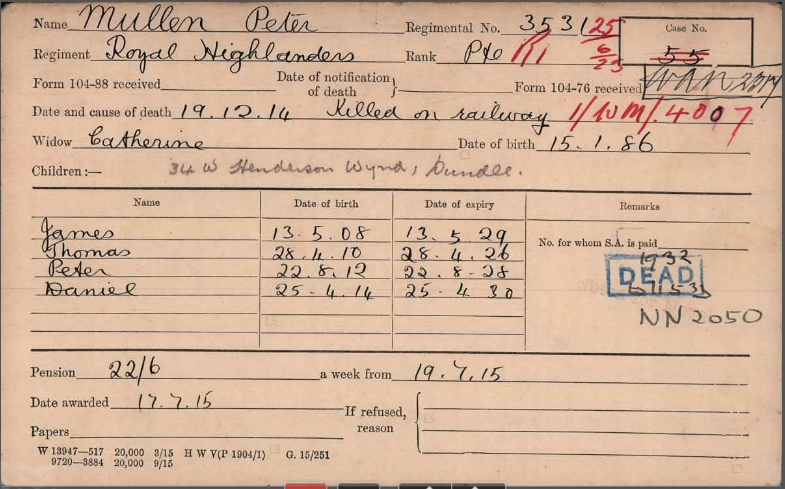 IS KILLED ON RAILWAY IN FRANCE.

Private Peter Mullen, of the 3rd Black Watch, braved the bullets of the enemy, only to meet his death on the railway in France.

His wife who lives at 40 Watson’s Lane Dundee, has received intimation of her husband’s death.  The news is contained in a letter from the Rev. M. Buchanan, chaplain to the forces, which is in the following terms :___

“I very much regret to have to tell you that your husband was run over on the railway and killed at once.  The body was brought here, and I have arranged for the burial, which will be at 3 o’clock this afternoon.  As his identity disc showed that he was a Roman Catholic, I have arranged with the parish priest to bury him, as I felt sure that would be in accordance with his wishes.  He will be buried in consecrated ground.”

Nothing seems to be known of how the accident occurred, as no one saw it happen, but death had clearly been instantaneous.  Deceased who was thirty years of age, was a millworker at South Dudhope Works, and previously to joining the 3rd Black Watch had seen service in the militia.  He is survived by a widow and four children, the youngest of whom is seven months old.

Can you tell us more about Peter Mullen'? Some additional facts, a small story handed down through the family or perhaps a picture or an heirloom you can share online. Contact our curator...