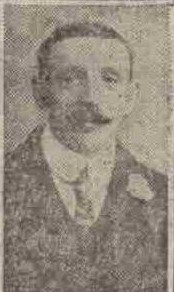 H.M.H.S. Rohilla was a passenger steamer of the British India Steam Navigation Company which was built for service between the UK and India, and as a troopship. After becoming a hospital ship in the First World War, Rohilla ran aground in October 1914 near Whitby with the loss of 83 lives.

John Murphy (42), 133 Princess Street, Dundee, perished in the wreck of the hospital ship Rohilla.  He was an experienced seaman, and joined the Rohilla three weeks ago.  His death has come as a sad blow to his wife and son.  The latter is a Territorial.  Mr Murphy was engaged as a greaser.

Can you tell us more about John Murphy'? Some additional facts, a small story handed down through the family or perhaps a picture or an heirloom you can share online. Contact our curator...