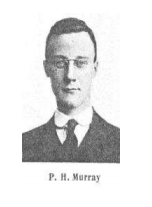 Lance-Corporal Murray was Dux of the Morgan Academy  in 1913 and a medallist in Scripture Knowledge, English and French. He entered the University of Edinburgh as third bursar and, continuing his studies there, secured medals in French and Logic. He  gave every promise of a distinguished University career. He was a keen Scoutmaster and a devoted worker in connection with the YMCA.

Information has been received from the War Office that Lance-Corporal Peter H. Murray, Seaforth Highlanders, died of wounds while on service in Mesopotamia.  He was the only son of Mr A. S. Murray (Baxter Brothers & Co., Ltd.), 15 Baxter Park Terrace, Dundee.

Corporal Murray was a very distinguished pupil in the Morgan Academy, of which he was Dux Medallist in 1915.  He also gained medals for Scripture knowledge, English and French.  He entered the University of Edinburgh as third bursar, and, continuing his studies there, secured medals in French and logic, and gave every promise of a brilliant University career. In Edinburgh he was an ardent Boys’ Brigade officer, and during vacations zealously devoted himself to Y.M.C.A. work.

His death will be learned with much regret by his many friends and companions.  His frank and engaging manner, his bright and happy disposition, and his fine manly character never failed to win the esteem and affection of those with whom he came into contact.

He was only 22 years of age, and much sympathy will be felt for Mr and Mrs Murray in the loss of their young and devoted son.

Can you tell us more about Peter Herbert Murray'? Some additional facts, a small story handed down through the family or perhaps a picture or an heirloom you can share online. Contact our curator...