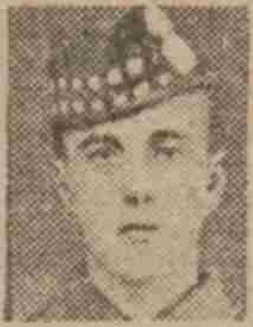 Pte. Adolf Nay. Royal Scots, eldest son of Mr and Mrs Nay, 16 Strathmartine Road, Dundee, was killed in action on 19th September.  Private Nay, who was 21 years of age, enlisted in 1916, and had been over two years in Salonika.  Prior to the outbreak of war, he was a millworker in Dura Works.

Can you tell us more about Adolph Nay'? Some additional facts, a small story handed down through the family or perhaps a picture or an heirloom you can share online. Contact our curator...