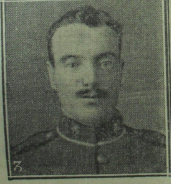 Robert has no known grave but is remembered on the Menin Gate Memorial. He was the brother of Pte John Ney 13009, 1st Battalion Cameron Highlanders, who died of wounds 11.05.1915.

A fine tribute is paid by a comrade-in-arms to Lance-Corporal Robert Ney, a Dundee member of the Cameron Highlanders, who has been killed in action.

Lance-Corporal Ney’s parents, who reside at 150 Overgate, were notified of their son’s death by his chum, Private J. Stewart, also a Dundee man, who writes as follows :– “I am Bob’s chum, and I am very sorry to tell you he has been killed.  We were getting a fire ready in the trenches to make some tea in the afternoon.  When I turned from the fire I saw him lying, so I knew he had been hit.  He died like a hero at his post.”

Lance-Corporal Ney was 23 years of age.  He was attached to the 2d Battalion Cameron Highlanders, and was killed on 23d April.  His period of service with the Cameron’s extended to six years, three of which were spent in India.  A younger brother, John, is at the front with the 1st Battalion of the same regiment.

Can you tell us more about Robert Ney'? Some additional facts, a small story handed down through the family or perhaps a picture or an heirloom you can share online. Contact our curator...