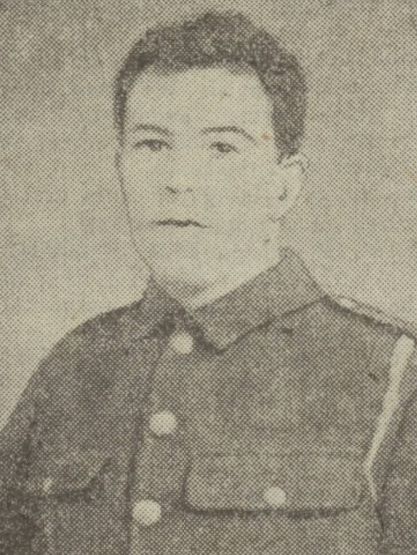 Ben has no known grave but is remembered on the Helles Memorial.

A letter from the Admiralty to his aged mother in Dundee conveys the sad intelligence that Petty Officer Ben Nicol had been killed in action at the Dardanelles.  Petty Officer Nicol was well known in Broughty Ferry, where he carried on a boot and shoe business in King Street.  Three years ago he joined the Volunteer Naval Reserve, and was at Antwerp with the Hood Battalion.  After further training at Devonport he went with the battalion to the Dardanelles, and in a letter home recently he told of three narrow escapes he had had in the trenches at Gallipoli Peninsula.  He was shot through the cap, and later a bullet went through his tunic, and the third experience was when he was about to lift a tankard to his mouth to drink, the tankard was clean shot out of his hand.  The fourth, apparently, has proved fatal.  He was only 22 years of age, and was very popular in Broughty Ferry.

Ben`s father, James, was a shoemaker and the family lived at 7 Ireland`s Lane and then 63 Victoria Road,Dundee. Ben opened his own boot & shoemaker`s business at King Street, Broughty Ferry early in 1914 and was due to be married when war broke out.

Ben joined the RNVR in 1912 and saw service with the Hood Battalion at Antwerp in 1914. He was the promoted to Petty Officer and after training at Devonport, went with the Battalion to the Dardanelles in 1915. He had three narrow escapes, being shot through the tunic, cap and whilst holding a tankard, but was killed in action at the 3rd Battle of Krithia. He was buried at the Battalion Rest Camp,150 yards south west of the 1st Pillar on the Krithia Road but his body was not found after the war.

Can you tell us more about Ben Nicol'? Some additional facts, a small story handed down through the family or perhaps a picture or an heirloom you can share online. Contact our curator...