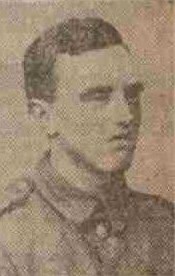 Private George Nicoll, Gordon Highlanders, who was reported missing between 21st and 25th March, 1918, is now reported to have been killed on the 22nd of that month.  Private Nicoll, who was the eldest son of Mr and Mrs David Nicholl, 3 Marshall Street, Lochee, enlisted in May, 1915, in the Cyclist’s Battalion, but was subsequently transferred to the Gordons.  He had been at the front since October, 1917.  Deceased was formerly employed in Camperdown Jute Works, (Cox Bros., Ltd.). Lochee.  Two brothers are serving—Driver David Nicoll, with the A.S.C. in France and Sapper Fred Nicoll, with the Engineers.

Can you tell us more about George Nicoll'? Some additional facts, a small story handed down through the family or perhaps a picture or an heirloom you can share online. Contact our curator...