We need you to tell us more about the life and times of James McA. Nicoll 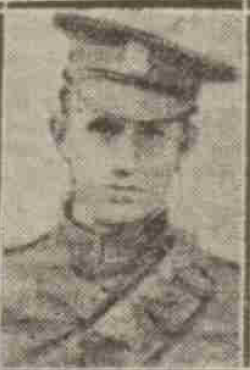 James has no known grave but is remembered on the Basra Memorial. He was the brother of Guardsman Robert Gibb Nicoll, 16783, 2nd Battalion Scots Guards, who was killed in action 03.06.1918.

Deceased, who was a son of the late ex-Constable David Nicholl, Dundee Police Force, had been 2½ years with the colours.  He joined when he was only 16 years of age, and was previously employed by M’Gregor & Balfour, Ltd., North Tay Works, Lochee.

Three of deceased’s brothers are with the colours, while a fourth, who lost an eye in one of the earliest engagements, has been discharged.

Can you tell us more about James McA. Nicoll'? Some additional facts, a small story handed down through the family or perhaps a picture or an heirloom you can share online. Contact our curator...