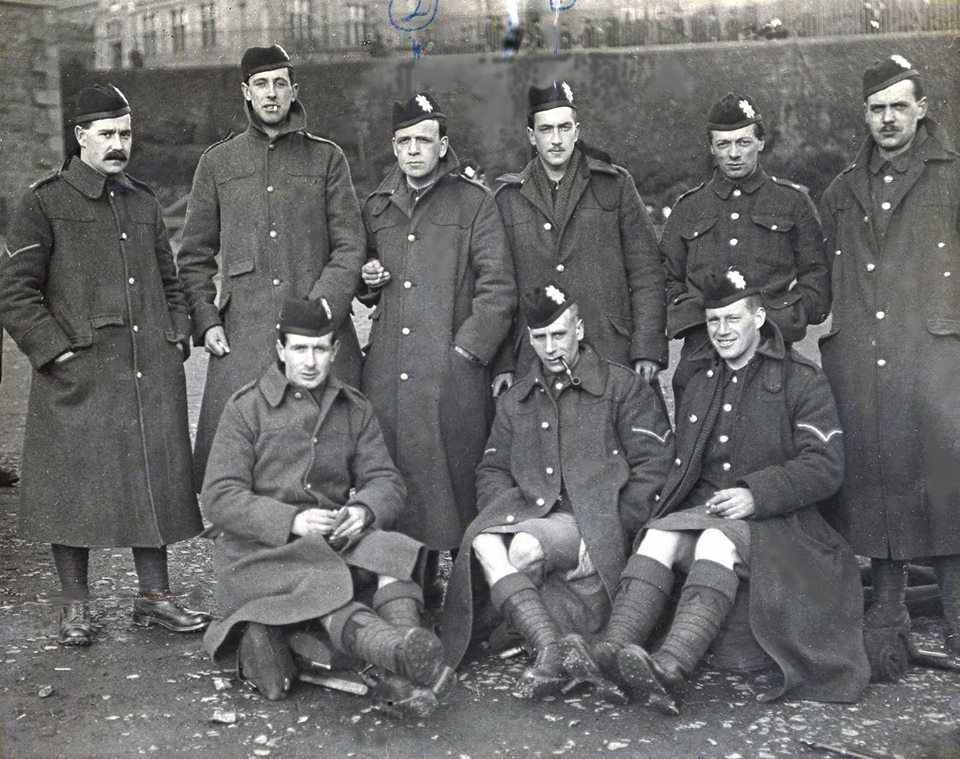 John was the brother of Pte David B. Nicholson, 3035, 5th Battalion Royal Scots, who was killed in action, 28.06.1915.
On 13 July 1915, 2253 Pte. John (Jack) Beveridge Nicholson, 4th Black Watch, one of Dundee’s renowned ‘Fighter Writers’, was killed in action, aged 21.
Nicholson, a staff writer at ‘The Dundee Advertiser’, was shot by a German sniper ‘at dead of night’, who also claimed the life of 1259 Cpl. William Hutchison, who had gone to his aid after the first shot was fired.
The men were part of a working party in the support trench, some twenty yards behind the firing line, and some one hundred yards from the German first line.
Jack died in the arms of his close friends, Joseph Lee, editor of ‘The People’s Journal’, and Linton Andrews, editor of ‘The Dundee Advertiser’. He was shot close to the heart and his death was almost instantaneous.
Corporal Hutchison was shot through the side. He ‘remained conscious for a little while, and asked how Nick was. Then he said he would turn over as his side was in agony. Becoming unconscious he died within an hour’.
Nicholson was the son of the Rev. Thomas Brown Nicholson, M.A., and Barbara Stevenson Nicholson, 136 Grieve Street, Dunfermline.
Notice of his death appeared in ‘The Courier’ on 20 July 1915.DUNDEE JOURNALIST KILLED. Intimation reached Dundee yesterday of the death of Private J. B. Nicolson [sic], of the 4th Black Watch. He was killed by a sniper. A son of the Rev. T. B. Nicolson, of Chalmers Street U.F. Church, Dunfermline, Private Nicolson was a journalist in Dundee, and he joined the 4th Black Watch shortly after the outbreak of war. Popular with his colleagues and comrades in the regiment, Private Nicolson has been cut down at the beginning of a career full of promise. The Courier, Tuesday, 20 July 1915, 6.Nicholson was a highly regarded journalist (‘as chivalrous and brave as he was mentally gifted’) and, like Andrews, had sent reports on the war to the Dundee press. He was also a poet or some ability, although only two of his poems are known.Joe Lee wrote ‘Marching’ as a tribute to his friend.Marching, marching,
On the old-time track;
Soldier’s song upon my lip,
Haversack upon my hip,
Pack upon my back;
Linton on my left hand,
On my right side Jack –
Marching, marching,
Steel swung at my thigh,
Marching, marching,
Who so gay as I?
(Left, left!)Marching, marching,
On the same old track;
Sorrow gnawing at my heart,
Mem’ry piercing like a dart,
Care perched on my back;
Linton on my left hand –
But, alas! poor Jack!
Marching, marching,
Quietly does he lie,
Marching, marching,
Who so sad as I?
(Left, left – LEFT!)

Nicholson is buried in St Vaast Post Military Cemetery, Richebourg l’Avoue, Pas de Calais, France, I. H. 7. Corporal Hutchison lies in the next grave. To date I have been unable to source an obituary or any image of Hutchison.

Can you tell us more about John Beveridge Nicholson'? Some additional facts, a small story handed down through the family or perhaps a picture or an heirloom you can share online. Contact our curator...