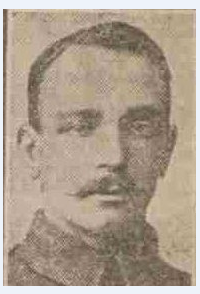 Mrs P. O’Brien, 41 Victoria Street, Dundee, has received official information that her husband, Gunner Patrick O’Brien, R.F.A., was killed in action on the 23rd March.  Gunner O’Brien was the eldest son of Mr and Mrs O’Brien, 2 Main Street, and he is survived by a widow and three children.  Previous to his enlistment in 1914 he was employed in Bowbridge Works.  A brother of Gunner O’Brien was killed in 1916, while two brothers are still serving.

Can you tell us more about Patrick O'Brien'? Some additional facts, a small story handed down through the family or perhaps a picture or an heirloom you can share online. Contact our curator...