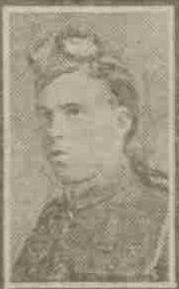 Andrew has no known grave but is remembered on the Thiepval Memorial.

The sad intelligence has been received by Mr and Mrs Ogilvie, 1 North William Street, Dundee, that their son, Private Andrew Ogilvie, has been killed in action.  Private Ogilvie, who was 19 years of age, enlisted in the R.F.A., in 1916, but was later transferred to the Scottish Rifles.  He had only been about a month at the front when he was reported wounded and missing, and afterwards officially reported killed.

Prior to enlistment he was in the employment of his brother, Mr Alexander Ogilvie, butcher, 112 Ann Street, Dundee.  Two brothers are serving in the army.

Can you tell us more about Andrew Stephen Ogilvie? Some additional facts, a small story handed down through the family or perhaps a picture or an heirloom you can share online. Contact our curator...