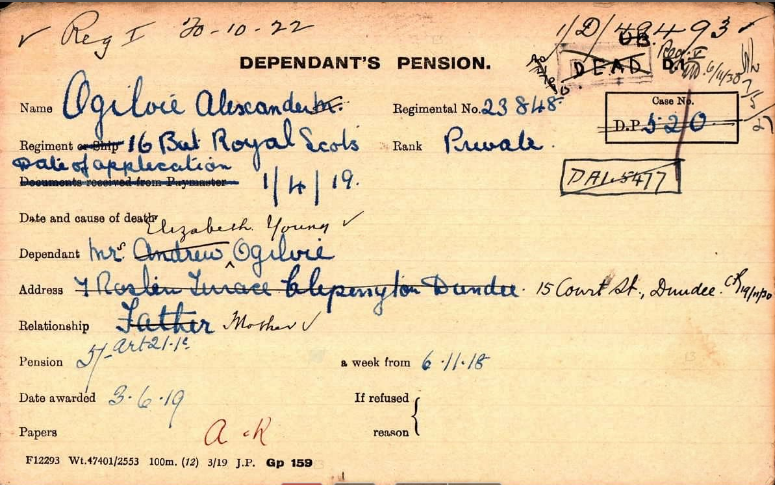 Alexander has something of an interesting story.  Born on the 16th of August 1889 to parents David Ogilvie a shipwright and to Elizabeth Ogilvie at 4 Paterson Road.

An interesting feature is that being a Dundee laddie he actually joined the 16th Bn Royal Scots rather than a battalion of a local regiment.   Whilst this is in and of itself not that unusual the interesting feature is the choice of 16th Bn. This was the first Sportsmans Battalion raised in the New Army in Scotland and was raised by Sir George McCrae of Heart of Midlothian fame and he brought with him  many of the Hearts of MIdlothian first team.   The battalion was extremely well recruited with Players and staff from football and other sports teams around Scotland followed by fans of hose teams also joining the ranks of the Bn.

Being an extremely well recruited Bn coupled with its popularity because of some of the big names in Scottish sport of the day,  it would not have required to be “topped up” with recruits which supports the assumption that Alexander chose this Bn rather than being allocated to it

It was involved in and severely blooded on the opening day of the Battle of the Somme 1 July 1916.  They are famously commemorated on the Cairn adjacent to the Church in Contalmaison which is visited annually in a pilgrimage  by members of the McCrae’s Trust

Alexander made the supreme sacrifice that day,  1 July 1916 at the age of 25 years alongside so many of his 16th Bn colleagues.  He is remembered on the Thiepval Memorial to the Missing of the Somme and now with this story on the Great War Dundee Roll of Honour.

Can you tell us more about Alexander Ogilvie'? Some additional facts, a small story handed down through the family or perhaps a picture or an heirloom you can share online. Contact our curator...