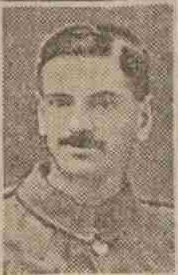 Rifleman John Ogilvy, King’s Liverpool Regiment, who was for many years employed in the advertising department of the “Courier,” has died in a hospital in France from the effects of pneumonia following gas poisoning.  Rifleman Ogilvy, who is a son of Mr and Mrs Ogilvy, Royal Exchange House, enlisted in March, 1916, and had been two years in France.  He had been once previously wounded.  He was 29 years of age, and leaves a wife, who resides at 3 Bonnybank Road.  Mr and Mrs Ogilvy’s daughter is a hospital sister.

Can you tell us more about John Alexander Peebles Ogilvy'? Some additional facts, a small story handed down through the family or perhaps a picture or an heirloom you can share online. Contact our curator...