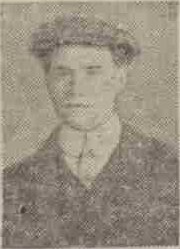 His wife, who resides at 6 Pennycook Lane, has received intimation from the military authorities that he was killed in action on the 25th September.

Private Old was 30 years of age.  He was married three years ago and leaves two children, one two years old and the other ten months.  His was a family of soldiers.  His father was a Cameron Highlander for 21 years, and he has three brothers at the front, one of whom, John, a Glasgow man, has been wounded.

Private Old was himself thirteen years with his regiment eight of which were spent in China and Africa.  He was a keen footballer, and played for St. Mary Magdalene’s, a well-know junior club in Dundee.

Can you tell us more about Thomas Old'? Some additional facts, a small story handed down through the family or perhaps a picture or an heirloom you can share online. Contact our curator...