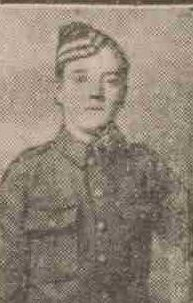 There is no Alex Ormond, Gordon Highlanders listed on either C.W.G.C. or S.D.G.W. Served as Alexander McKay

Pte. Ormond, was attached to the Machine Gun Section of the battalion, and sustained his wounds at the hands of a German sniper.  He was 22 years of age, and was previously employed by Wm. Lawson & Sons, Ltd., rope and twine manufacturers, Dundee.

DUNDEE SOLDIER KILLED BY A SNIPER.

Intimation has been received in Dundee of the death in action of Private Alex. M’Kay, 1st Gordon Highlanders.  Writing to Miss Mary Anderson, a friend of the deceased, Lance-Corporal W. Brown says :—“Alex was with the bomb-throwers, and was shot through the head by a sniper, death being instantaneous.”  Nineteen years of age, Private M’Kay was a member of the machine-gun section of the battalion, and was formerly employed with Messrs William Lawson & Sons, Ltd., rope and twine manufactures, Dundee.

Can you tell us more about Alexander Martin Ormond'? Some additional facts, a small story handed down through the family or perhaps a picture or an heirloom you can share online. Contact our curator...