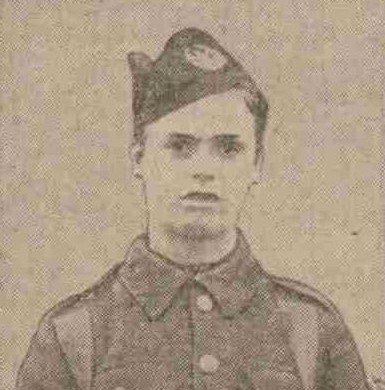 A remarkable story of a young Dundee lad’s patriotism has just come to light.

The circumstances under which it was disclosed, however, are extremely sad, as the heroic young soldier has laid down his life on the battlefield.

The oldest of a family of eight, Private Robert Patterson enlisted in the Black Watch when he was only 15 years of age.  He was a son of Mr and Mrs William Patterson, 3 Crescent Street, and formerly of 14 Court Street, Dundee.  Private Patterson was not long in the Black Watch, however, when his parents made representations to the War Office, and he was discharged on account of his youth.  A short time afterwards the lad enlisted in the Scottish Rifles, and was subsequently attached to the H.L.I.  Private Patterson would not hear any further action on the part of his parents to take him out of the army.

While lying at a base with his regiment he learned that a battalion of the King’s Own Scottish Borderers would probable be going up to the trenches soon.  With the pluck that marked his former actions, Private Patterson succeeded in getting a transfer to that battalion.  Intimation of his death in action has just come to hand.

Before he enlisted Private Patterson was employed in Rashiewell Works, Dundee.

Can you tell us more about Robert Patterson'? Some additional facts, a small story handed down through the family or perhaps a picture or an heirloom you can share online. Contact our curator...