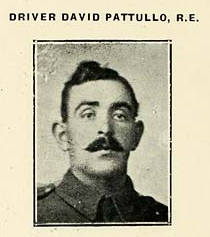 “Before the war he had been a ploughman in the Dundee district. He joined the army in May 1915, and had been fro six months at the front in France. On 30th July 1916 he was severely wounded by a bomb dropped from a German aeroplane, and was taken to No5 Casualty Clearing Station, where he died the next day.” Arbroath Roll of Honour. He was the brother of Pte Allan Pattullo, S/18044, 3rd Reserve Battalion, Black Watch, who died of disease, 12.03.1917.

Mrs Pattullo, 69 Helen Street, Arbroath, has received a letter from a nurse in a hospital in France stating that her son, Driver David Pattullo, Royal Engineers, had died from severe wounds in the chest, left arm, and left leg.  Deceased, who was 34 years of age, joined the Royal Engineers about a year ago.  Before the war he was employed as a farm servant in the Arbroath district.

Can you tell us more about David Pattullo'? Some additional facts, a small story handed down through the family or perhaps a picture or an heirloom you can share online. Contact our curator...